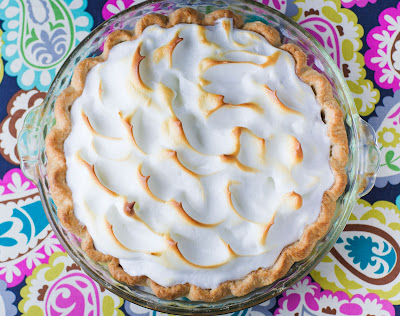 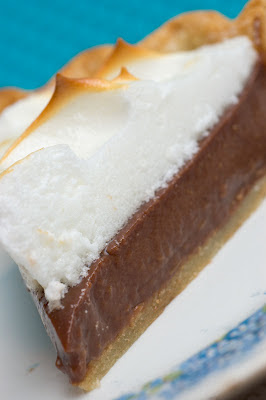 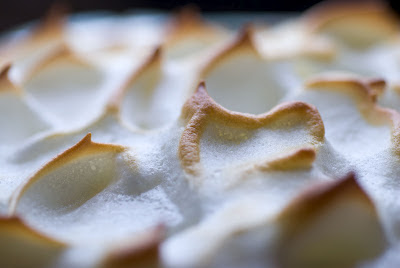 At lunch one day recently, Brad's dad ordered this amazingly delicious-looking piece of chocolate pie.  We were at Golden Rule BBQ, and they make some of the best-looking pies you've ever seen.  I always tell myself that I'm going to be bad and order a piece of pie one of these days at lunch, but for some reason my conscience always wins the to-have-a-piece-of-pie-or-not-battle.

So, I just couldn't get this pie out of head the rest of the day.  I mean, I was daydreaming about pie, for goodness sake...That can't be good...?

Plus, did you know that February is National Pie Month?!?

So, what did I do?  Well, I went straight to my new southern-cooking-bible (a.k.a Bon Appetit, Ya'll by Virginia Willis) to see if she could fix my pie-cravings.

I flipped through the dessert section and what did I find?  The P.E.R.F.E.C.T. recipe to try.  It's titled "Aunt Julia's Chocolate Pie", and it sounded incredible.  In fact, Virginia even says, "This is hands-down my favorite dessert."  And folks, any recipe that Virginia says that about is bound to be amazing.

A tender pie crust is filled with decadent chocolate custardy goodness, and freshly-made meringue finishes the pie beautifully.  I have to agree with Virginia here...it IS indeed delicious.

In fact, I made this pie for Brad and me a few nights ago, and now ANOTHER one is in the works as I type this.  See, I got a call from my little niece, Dakota, earlier today, and she asked me in her sweet little voice to "pretty please" bring her a piece of pie.  Well, I figure I can do better than just a measly little ole' piece...I'm making her a whole pie!  Plus, seeing as there's hardly any left now,  I better make a second one!

I recently had the pleasure of meeting Virginia Willis at Food Blog South in Birmingham, AL.  She is one classy and amazing lady!  I highly recommend her cookbooks - Bon Appetit, Ya'll and Basic to Brilliant, Ya'll. 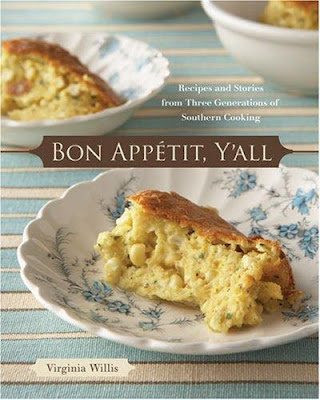 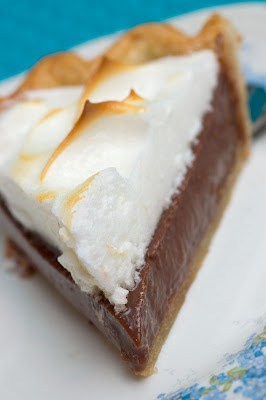 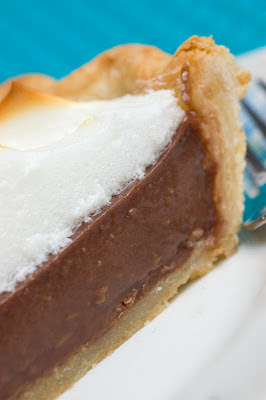 To prepare the pie filling, in a saucepan, combine 1 cup of the milk with the 1 cup of granulated sugar. Set aside.

In a bowl, combine  the remaining 1 cup of milk, the flour, and cocoa powder in a bowl and whisk thoroughly to combine. (Mama uses a shaker and shakes the mixture until it is well combined and frothy.) Set aside.

Heat the saucepan with the milk-sugar over medium-high heat until simmering. Slowly add the milk-flour mixture and stir to combine. Bring to a boil. Add the egg yolks, whisking constantly, until it returns to a boil. Once the mixture comes to a boil, add the vanilla and remove it from the heat.

Pour the mixture into the baked pie crust. Set aside.

To make the meringue topping, place the egg whites in a non-reactive bowl with a pinch of salt. Add the cream of tartar and, using a hand-held mixer, whisk on high speed until foamy. Sift over the confectioners' sugar a little at a time and whisk until the whites are glossy and hold stiff peaks when the whisk is lifted.

To finish the pie, spoon the meringue over the pie, making sure it touches the edges of the pie crust. Bake until golden brown, 3-5 minutes. Move to rack to cool completely and set, then serve. 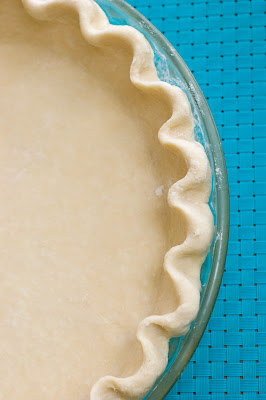 
In the work bowl of a food processor fitted with the metal blade, combine the flour and salt, then add the vegetable shortening and butter.  Process until the mixture resembles coarse meal, 8 to 10 seconds.

With the processor on pulse, add enough of the ice water, 1 tablespoon at a time, until the dough holds together without being sticky or crumbly.  Shape the dough into a disk and wrap in plastic wrap.  Chill until firm and the moisture has distributed evenly, about 30 minutes.

Flour a clean work surface and a rolling pin.  (If making a double-crust pie or 2 pie shells, work with one disk at a time, keeping the second disk chilled.)  Place a dough disk in the center of the floured surface.  Starting in the center of the dough, roll to, but not over, the upper edge of the dough.  Return to the center, and roll down to, but not over, the lower edge.  Lift the dough, give it a quarter turn, and lay it on the work surface.  Continued rolling, repeating the quarter turns, until you have a disk about 1/8 inch thick.

Ease the pastry into a 9-inch pie plate.  Trim 1 inch larger than the diameter of the pie plate; fold the over hanging pastry under iteself along the rim of the plate.  For a simple decorative edge, press the tines of a fork around the folded pastry.  To make a fluted edge, using both your finger and thumb, pinch and crimp the folded dough.  Chill until firm, about 30 minutes.

To blind bake, preheat the oven to 425 degrees F.  Crumple a piece of parchment paper, then lay it out flat over the bottom of the pastry.  Weight the paper with pie weights, dried beans, or uncooked rice.  This will keep the unfilled pie crust from puffing up in the oven.

For a partially baked shell that will be filled and baked further, bake for 20 minutes.  Remove from the oven and remove the paper and weights.  (You can reuse the rice or beans for blind-baking a number of times.)  The shell can now be filled and baked further, according to the recipe directions.  For a fully baked shell that will hold an uncooked filling, bake the empty shell until deep golden brown, about 30 minutes total. 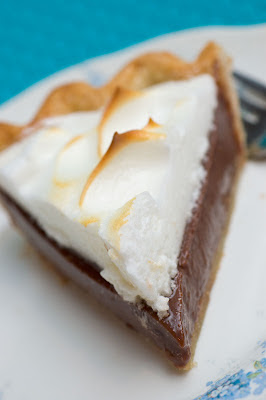 These photos look amazing, and I feel like I can taste this pie right now. The ingredients look so basic!

YAY! Thanks so much. Your post made me so hungry! It was a pleasure to meet you and thank you so much for your very kind words. Best VA

I have a Liebster Blog Award for you in my blog: http://jaanaskitchen.blogspot.com/2012/02/liebster-blog-award.html

Oh this pie does look amazing! I think it is the look of that fluffy meringue that takes it over the top. It is making wish I had some pie for breakfast this morning!

NOw that is a pie that could win my heart!! Positively mouthwatering!

Celeste, this pie looks amazing, as I would expect from any recipe from Virginia. You did a fantastic job on the meringue - it looks heavenly. My friends and I are having an Oscars party and were each assigned a movie for the theme of food we bring. I was assigned The Help, so you know I need to make chocolate pie. May need to take a closer look at this recipe.

Virginia - Thank you so much for commenting! This recipe is incredible, of course! It was such a pleasure to meet you!

Jes - Yes! This would be the perfect pie for you to make! I adore that movie...It's one of my favorites.

WOW, I made this a while back and now my family request it on a regular basis. Its possibly going to be a pie at my daughters dessert table for her wedding coming up. It is so good!! Thank you for sharing it with us.

I just made it using this recipe!!! Whew..... Mine isn't "pretty" to my standards but we will see what the people that I made it for think of it :)