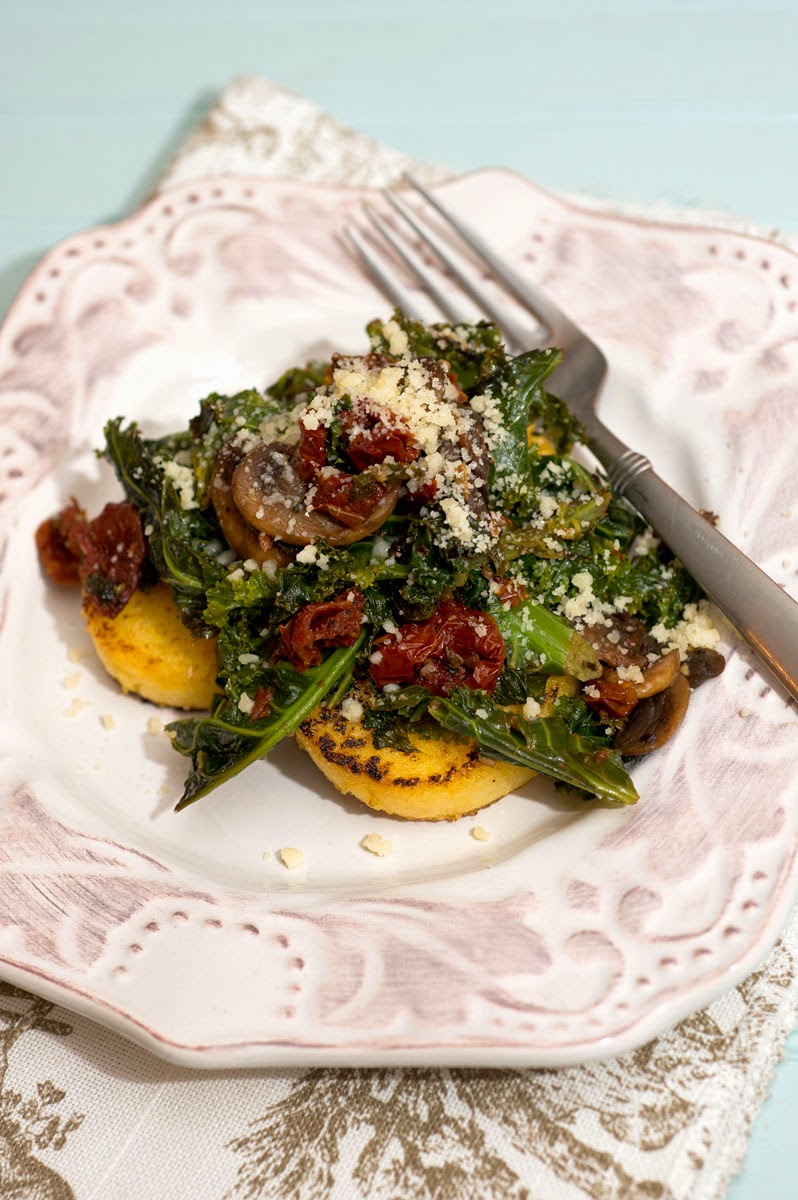 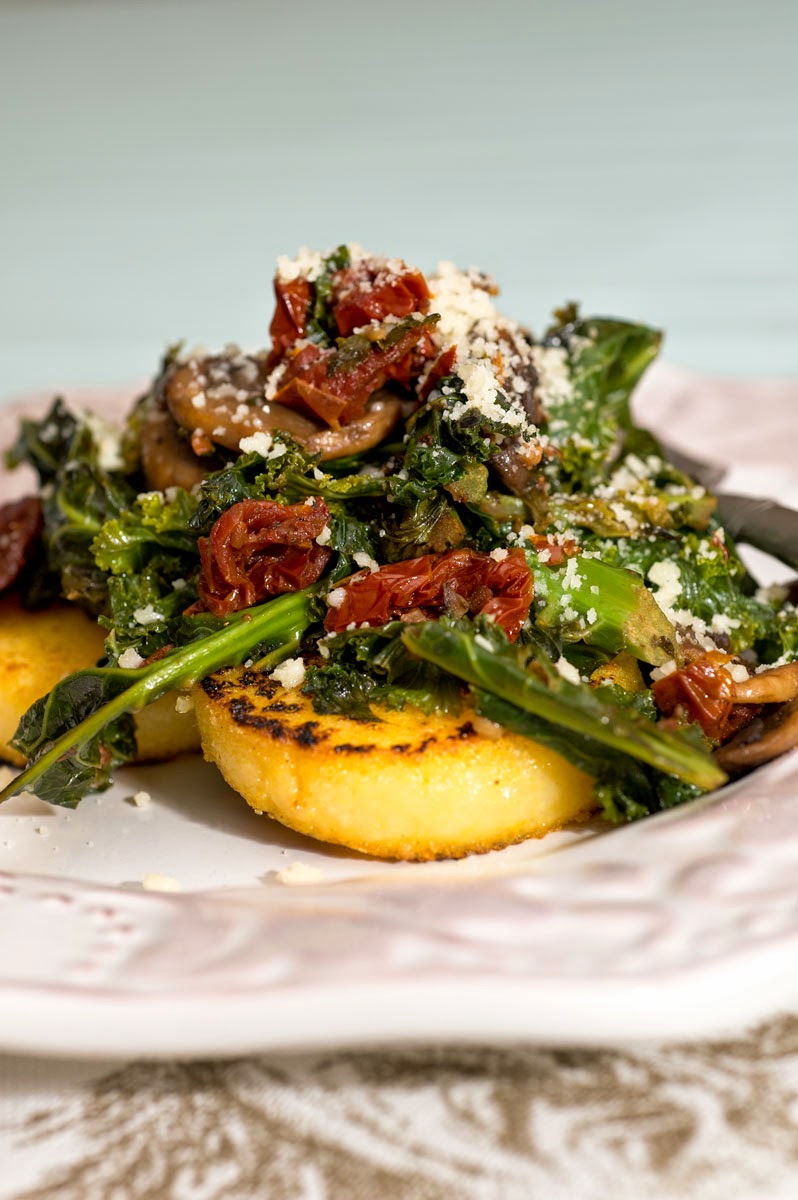 Simple weeknight meals are something that I'm always on the lookout for.  After all, it's way too easy to get in a routine of making the same old things every week (I'm totally guilty of this!).  This meal from Whole Foods Market is a great example...It's one of their highest rated recipes on their website, plus it looked super easy.  So, I decided to give it a try.

I'm a big fan of kale lately, so it's no surprise I was drawn to this recipe.  I jokingly say that I'm going to turn green one day from eating it so much.  I mean, it IS healthy!  :)  I love it, because it's pretty versatile and has a great flavor.  The ingredients for this meal are also inexpensive, and I ended up with LOTS of extra kale from the 32oz bag to use in other recipes.

This dish did indeed  come together quickly.  It's as simple as sauting a skillet full of mushrooms, sun-dried tomatoes, garlic and kale.  Then, slices of polenta are quickly sauted in a separate skillet until golden.  Easy peasy.  You can have dinner on the table in less than 30 minutes, from start to finish.

Of course, the first question out of my husband's mouth when I placed his plate in front of him was, "But, where's the meat?!?"  That silly man.  I should have known.  If your hubby is anything like mine, crumbled bacon would make a perfect add-on to this quick dinner.

***This post is brought to you by the great folks at Whole Foods Market.*** 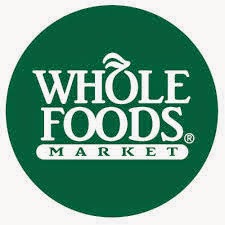 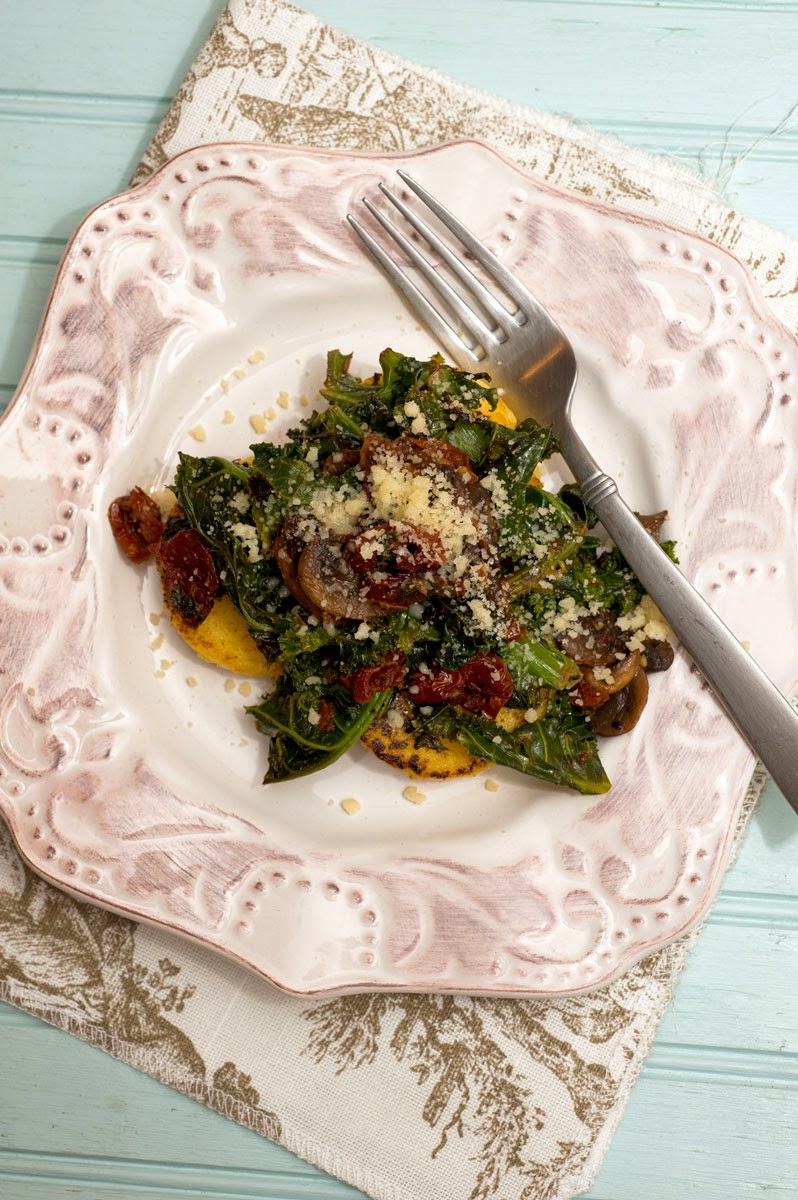 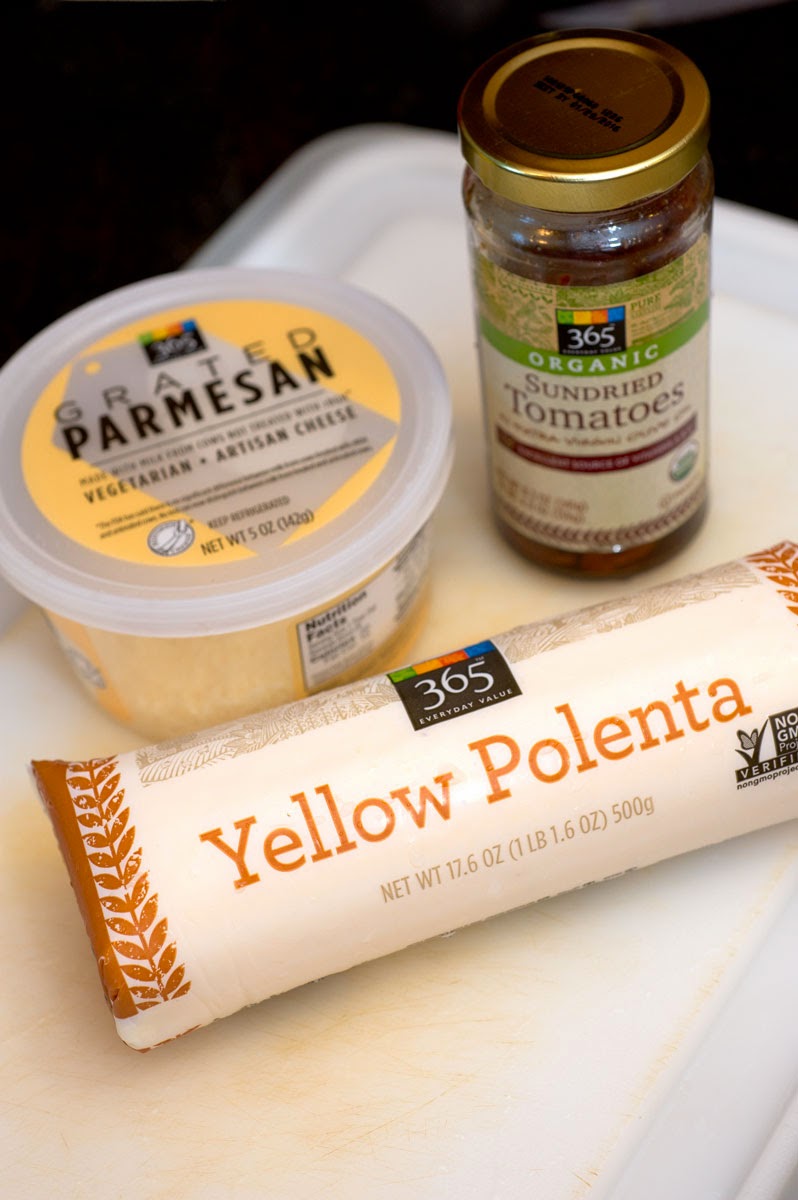 Directions:
Heat 1 tablespoon of the oil in a large skillet over medium high heat. Add mushrooms, salt and pepper and cook, stirring occasionally, until softened, about 5 minutes. Add tomatoes and garlic and cook another 2 minutes. Stir in kale and 1/4 cup water, cover, reduce heat to medium low and cook until kale begins to wilt, about 2 minutes. Toss well, season with salt and pepper, cover and cook until wilted, about 2 minutes more. Cover and set aside.

Heat remaining 1 tablespoon oil in a large nonstick or cast iron skillet over medium high heat. Arrange polenta in skillet in a single layer (working in batches, if needed) and cook, flipping once, until golden brown on both sides, 5 to 6 minutes total. Transfer polenta to a paper towel-lined plate as done.

Arrange polenta on plates, spoon kale and mushroom mixture over the top, garnish with cheese and serve. 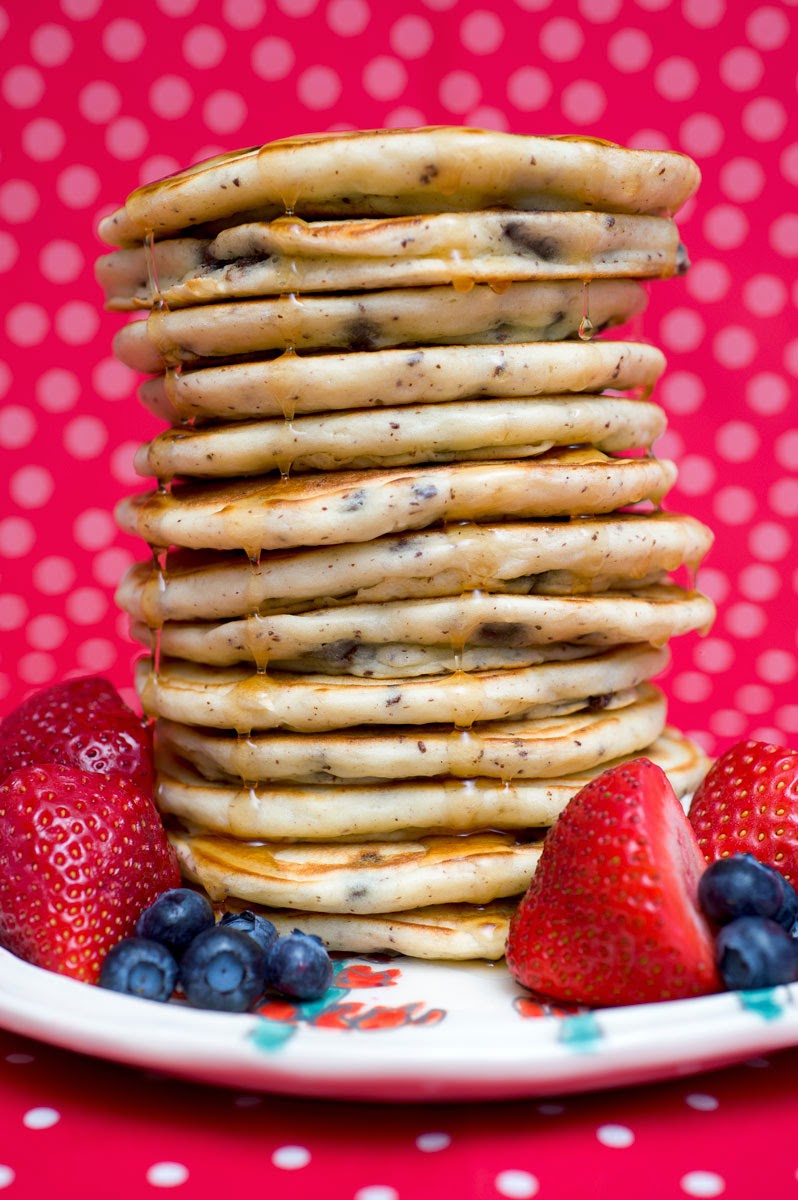 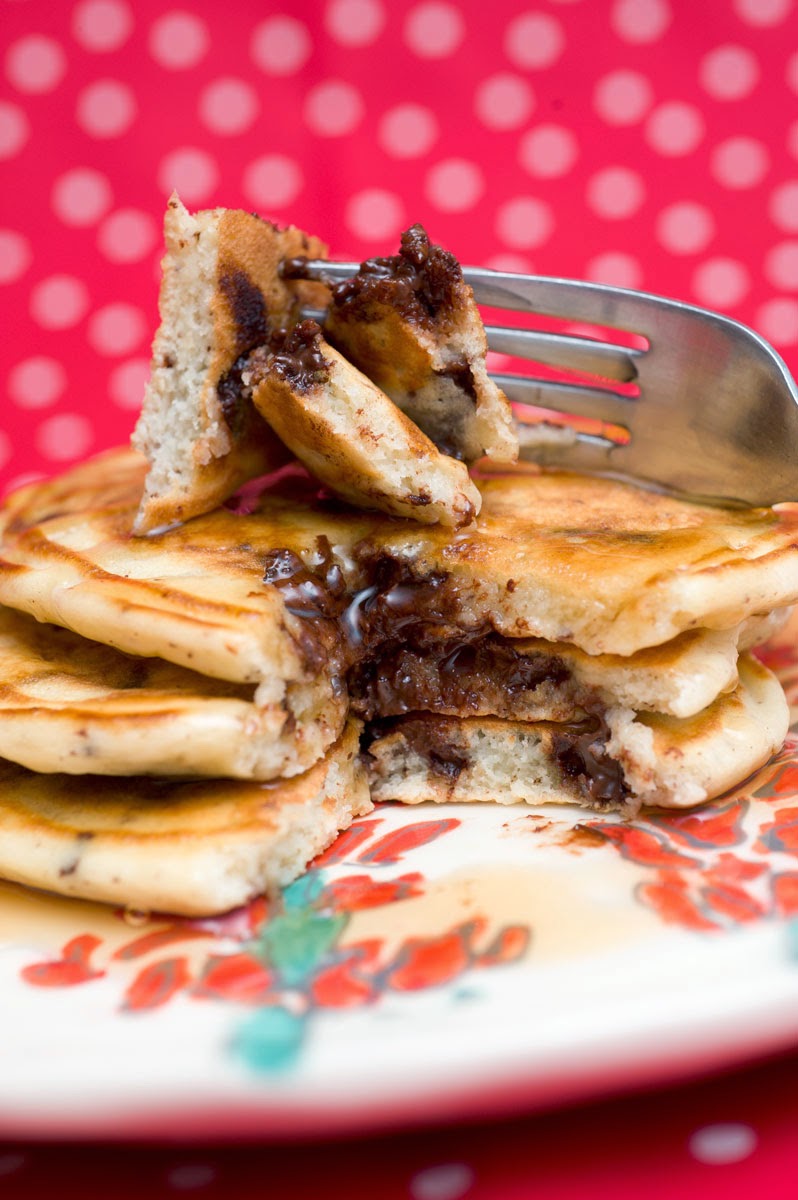 I just love it when my little nieces spend the night.  We always have such a fun time.  The last time they both spent the night with us, we drug the telescope out of retirement and gazed up at space, while the cicadas hummed and sang from the trees all around us.  They learned all about the craters on the moon, Saturn's rings, constellations and Mars.  Talk about a picture perfect summer evening!

We have a tradition of waking up on Sunday morning and baking something fun together.  I've written about the Buttermilk Biscuits and Chocolate Chip Muffins we've made before here on the blog.  Well, these gorgeous, mouth-watering pancakes are the results of one such recent sleep-over.

These pancakes are amazingly easy, yet so delicious you'll go back for seconds (okay, maybe thirds!).  I mean, who can resist a breakfast that's filled with ooey gooey chocolate chips and is covered with sweet syrup?!? 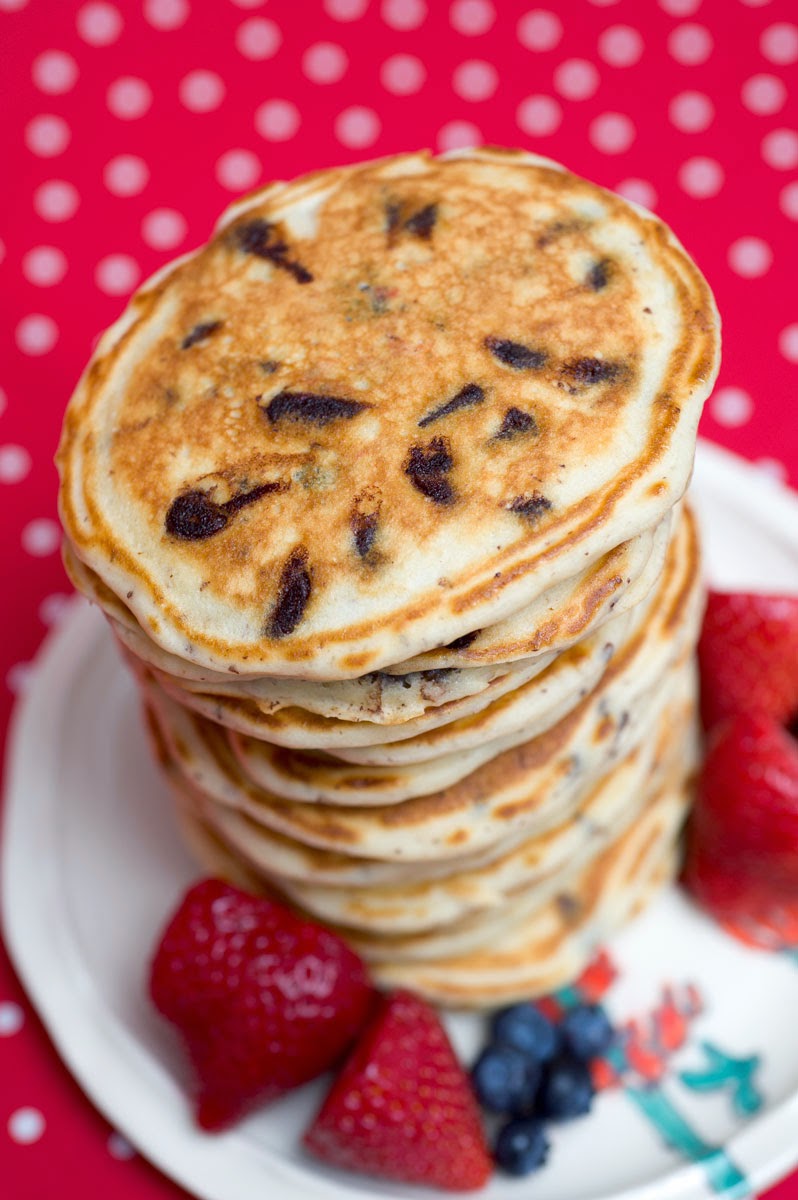 Directions:
In a large bowl, stir together flour, sugar, baking powder, baking soda and salt.  In another bowl, use a fork to combine egg, buttermilk and oil.  Add egg mixture all at once to flour mixture.  Stir just until moistened (batter should be slightly lumpy).  Stir in chocolate chips.

For each stand-size pancake, pour about 1/4 cup batter onto a hot, lightly greased griddle or heavy skillet, spreading batter if necessary.

Cook over medium heat for 1 to 2 minutes on each side or until pancakes are golden brown, turning to second side when pancakes have bubbly surfaces and edges are slightly dry.  Serve warm.  If desired, top with syrup. 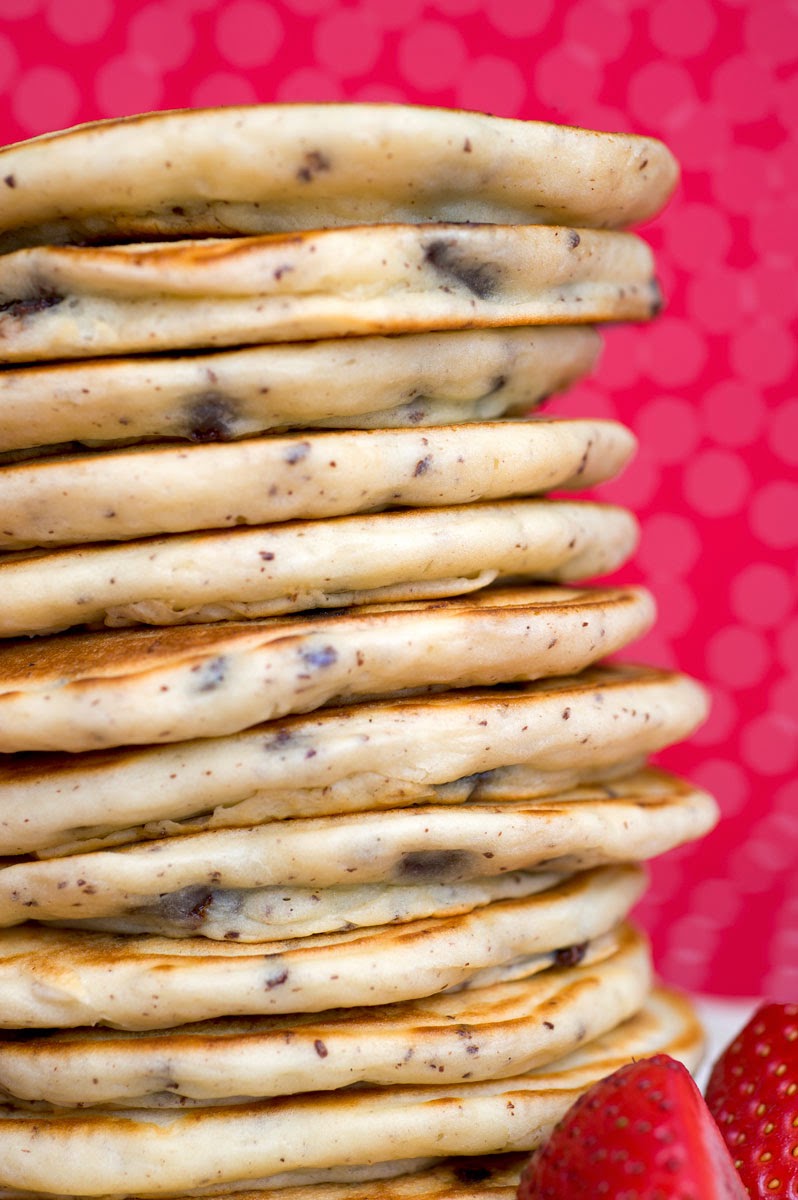