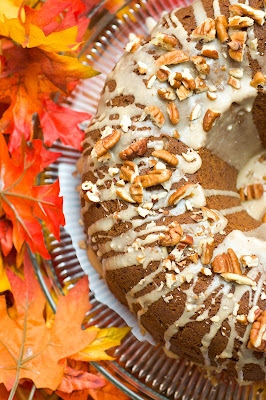 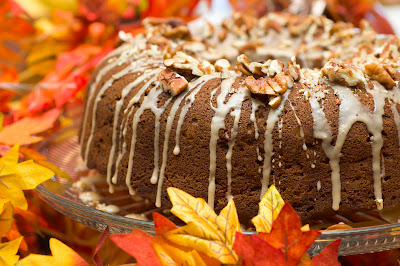 "Autumn on a fork"
That's the best way to describe this yummylicious bundt cake that's packed with pumpkin, spices, apple chunks, pecans and cranberries.  It was really hard not to drool while this cake was baking in the oven.  It made my entire house smell quite heavenly, so I couldn't wait to try a slice!  This cake would also make a beautiful addition to your holiday table this year.
I took Dorie's advice and added a maple glaze, but I used The Pioneer's Woman's recipe from her sinful Cinnamon Rolls (which are a Christmas morning tradition at our house!).  Her recipe incorporates fresh coffee, which made an amazing pairing with the flavors of this cake.
Like Dorie mentions in her cookbook, this cake isn't conducive to tiny little slices...You just better go ahead and commit to a big chunk of a piece.  There are so many chunks of goodness sporadically baked into the cake, so it's hard to cut little bitty pieces.
However...
I can't imagine WHY in the world you would even  consider eating a small piece of this bundt cake wonder, though.  :) 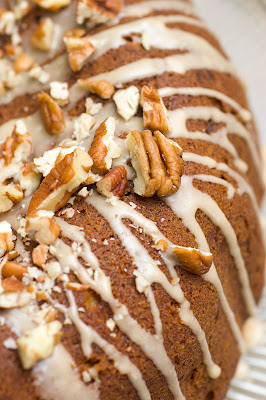 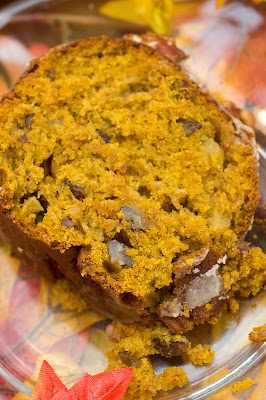 All-in-One Holiday Bundt Cake
(from Baking: From My Home To Yours)
Ingredients:
2 cups all-purpose flour
2 tsp baking powder
1/2 tsp baking soda
2 tsp ground cinnamon
1/4 tsp freshly grated nutmeg
Pinch of salt
1 1/2 tsp grated fresh ginger (or 1 tsp ground ginger)
1 1/4 sticks (10 tbsp) unsalted butter, at room temperature
1 cup sugar
1/2 cup (packed) light brown sugar
2 large eggs, at room temperature
1 tsp pure vanilla extract
1 1/4 cups canned unsweetened pumpkin puree
1 large apple, peeled, cored and finely chopped
1 cup cranberries, halved or coarsely chopped
1 cup pecans, coarsely chopped
Confectioners’ sugar, for dusting or maple syrup icing (see note)
Directions:
Center a rack in the oven and preheat the oven to 350 degrees F. Butter a 9- to 10- inch (12 cup) Bundt pan. Don’t place the pan on a baking sheet-you want the oven’s heat to circulate freely through the Bundt’s inner tube.
Whisk together the flour, baking powder, baking soda, cinnamon, nutmeg, salt and ground ginger, if you’re using it (not the grated ginger).
Working with a stand mixer, preferably fitted with a paddle attachment, or with a hand mixer in a large bowl, beat the butter and both sugars together at medium speed until light and fluffy. Add the eggs one at a time, and beat for 1 minute after each addition. Beat in the vanilla. Reduce the mixer speed to low and add the pumpkin, chopped apple and grated ginger, if you’re using it-don’t be concerned if the mixture looks curdled. Still on low speed, add the dry ingredients, mixing only until they are incorporated. With a rubber spatula, stir in the cranberries and pecans. Scrape the batter into the pan and smooth the top with the rubber spatula.
Bake for 60 to 70 minutes, or until a thin knife inserted into the center of the cake comes out clean. Transfer the cake to a rack and cool for 10 minutes before unmolding, then cool to room temperature on the rack.
Note: just before bringing the cake to the table, dust it with confectioners’ sugar or drizzle it with maple syrup icing, which Dorie introduces in her “playing around” section and which King H used to much praise in his version. Simply sift 6 tablespoons confectioners’ sugar into a bowl and stir in 2 tablespoons maple syrup. Add more maple syrup little by little, until you have an icing that runs nicely off the tip of the spoon — you might need another 1/2 tablespoon syrup to get the right consistency. Put the cooled cake on a sheet of wax paper and drizzle the icing from the tip of the spoon over it. Let the icing set for a few minutes before serving.
Before going into the oven... 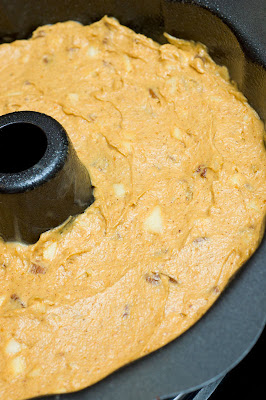 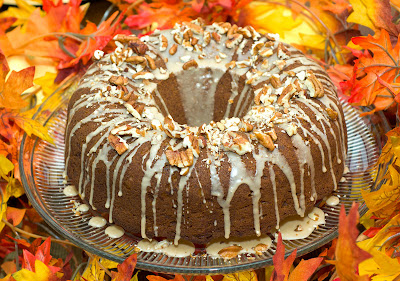 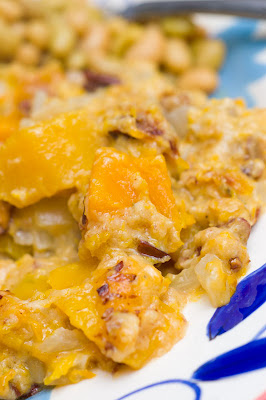 Here in Alabama, the days are getting shorter, the air is becoming cooler, and the leaves are starting to turn beautiful shades of red, orange and yellow...Fall is in the air!  What better way to welcome the new season than with a deliciously comforting Butternut Squash Casserole?

I found some beautiful butternut squash at James' produce stand near my house a few weeks ago.   James told me about the delicious Butternut Squash Casserole that his wife had made a few nights earlier.  That sounded like an amazing idea to me, so I started looking up recipes online.  I came across the following recipe over at Ezra Pound Cake, which sounded awesome.  I had most of what I needed on-hand, and I improvised the rest.  I've marked my changes in bold type below...There were really only a few of them.

I must say that this has earned a spot in the "Home for the Holidays" tab, because it tastes just like Thanksgiving to me!  It would be the perfect substitute for Sweet Potato Casserole if you wanted to switch things up a bit this holiday season.

However, don't wait for a special occasion or holiday to try this one...It's WAY too yummy! 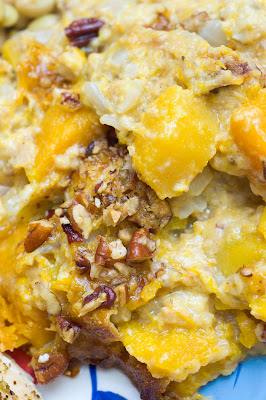 Links to this post
Labels: Comfort Foods, Home for the Holidays, Side Dishes 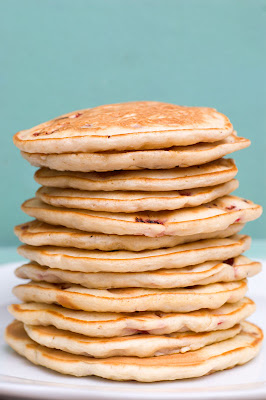 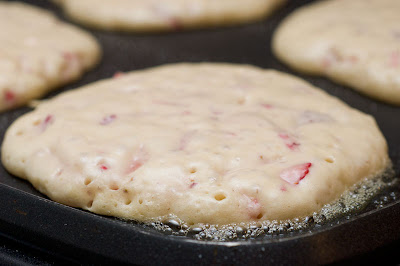 Our little ritual of Sunday morning pancakes has to be one of my favorite parts of the week.  It's hard to beat sleeping in a little bit and enjoying a homemade breakfast consisting of a tall stack of mouth-watering pancakes, bacon and scrambled eggs.  You know that any day that starts like that is bound to be a pretty fantastic day!
Last Friday was my birthday, and what a great day it was!  I got to see my family, and my sisters got to come stay with us all weekend.  When they are in town, I don't think we slow down the entire time....we just go, go, go!  Needless to say, this weekend was filled with a beautiful hike at Ruffner Mountain, meandering the booths at Homestead Hollow, pumpkin AND mum picking, and lots of shopping!  What fun!
On Sunday morning, I got up and made these pancakes for everyone.  I was thrilled with the way they tasted.  They were super easy and all the fresh strawberries were amazing.  One of my sisters isn't really crazy about pancakes and even she LOVED these!
Make these on a Sunday morning and you'll be in love with them too.  :-)
Bon Appetit!


Halfway through our hike... 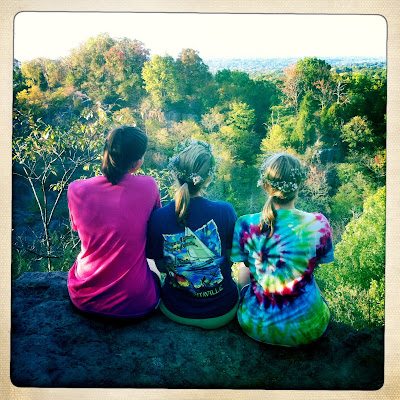 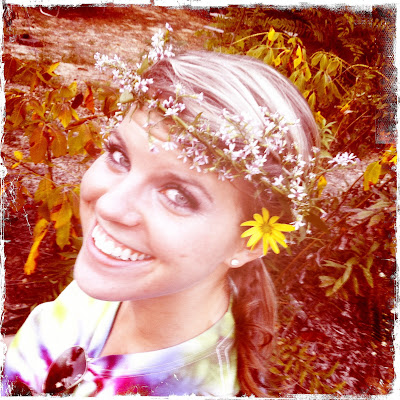 I made pretty flower wreaths for their hair... 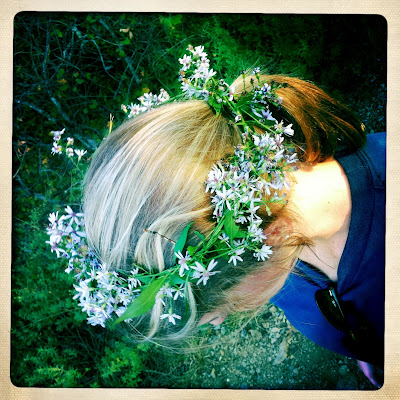 Me and the hubby 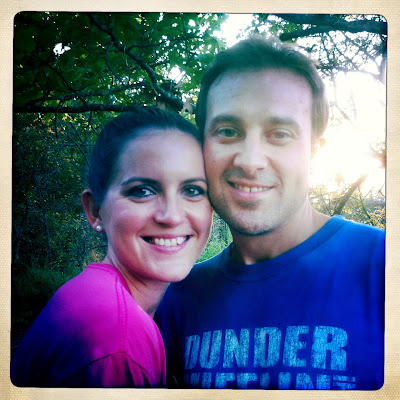 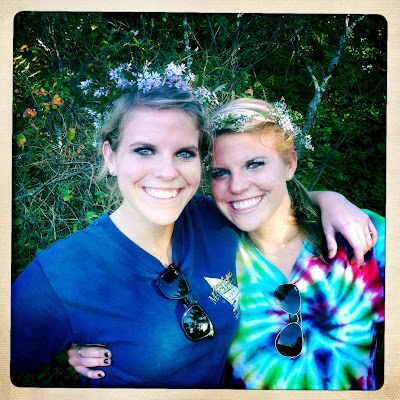 Even Hannah had a blast! 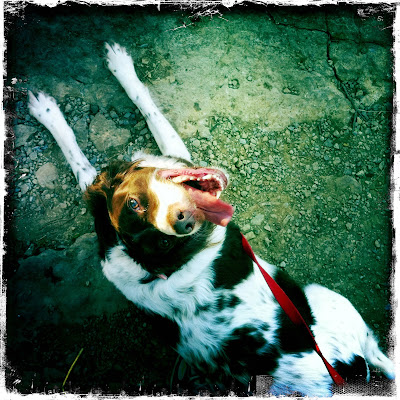 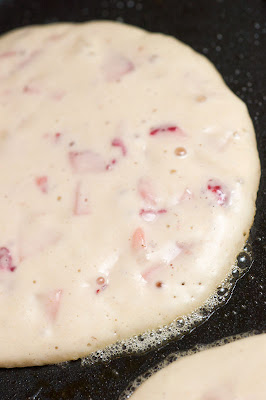