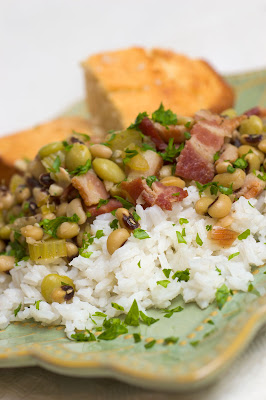 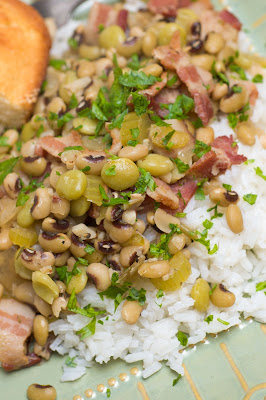 HAPPY NEW YEAR!
I hope that you all had a wonderful transition into 2012.  Brad and I have had an exciting start to the new year (it was Brad's birthday today!) and are looking forward to see what 2012 will bring our way.
While researching the traditional "lucky" new years foods for my blog post a few days ago, I kept coming across a dish called "Hoppin' John."  It peaked my curiosity, so I decided to see what all the fuss was about.
As it turns out, Hoppin' John is a traditional new years food that many southern families eat at the stroke of midnight on New Year's Eve...with a glass of champagne, of course!
The saying goes:
"Eat poor that day, eat rich the rest of the year.  Rice for riches and peas for peace!"
I found the following info over at whatscookingamerica.net:


The first written recipe for Hoppin John appeared in The Carolina Housewife in 1847.
Most food historians generally agree that Hoppin John is an American dish with African/French/Caribbean roots.
There are many tales or legends that explain how Hoppin' John got its name:

- It was the custom for children to gather in the dining room as the dish was brought forth and hop around the table before sitting down to eat.
- A man named John came "a-hoppin" when his wife took the dish from the stove.
- An obscure South Carolina custom was inviting a guest to eat by saying, "Hop in, John" - The dish goes back at least as far as 1841, when, according to tradition, it was hawked in the streets of Charleston, South Carolina by a crippled black man who was know as Hoppin' John.

Pretty neat, huh?  The layers of flavor in this dish really surprised me.  It was quite delicious, and I am excited to say that we are about to enjoy the leftovers for dinner tonight.  This was so good, that I plan to make it a New Year's tradition around our house.  I only made a few small changes - I added some lima beans that were leftover from the night before, used bacon instead of ham hock, and left out the green pepper.  I also added a little minced parsley for a pretty garnish.
Bon Appetit! 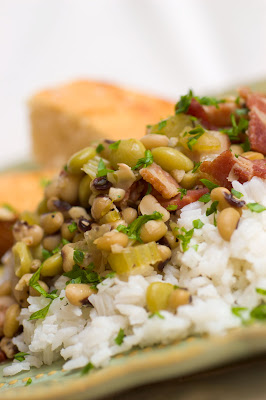 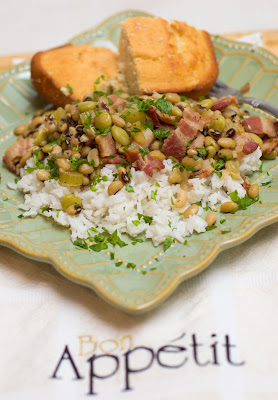 Hoppin' John
Source:  The Essence of Emeril;  Emeril Lagasse
Ingredients:
Directions:
Heat oil in a large soup pot, add the ham hock and sear on all sides for 4 minutes. Add the onion, celery, green pepper, and garlic, cook for 4 minutes. Add the black-eyed peas, stock, bay leaves, thyme, and seasonings. Bring to a boil, reduce the heat and simmer for 40 minutes, or until the peas are creamy and tender, stir occasionally. If the liquid evaporates, add more water or stock. Adjust seasonings, and garnish with green onions. Serve over rice.
Posted by Celeste at Monday, January 02, 2012

found this via pinterest and made it for our new years dinner (although we didn't wait for midnight) it was DELISH! Even better with collard greens on the side! I'll be making this every year (and most likely several times in between) THANK YOU for the recipe!