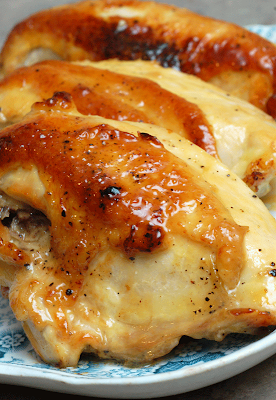 ***I adore a simple chicken recipe that's different from the same old thing, but also has a delicious flavor...and is very affordable! This recipe from Melissa d'Arabian is all of those things...Extremely easy, delicious, and affordable!

If you're like me, you were an avid watcher of last season's "The Next Food Network Star." I was rooting for Melissa the entire time. She's like a breath of fresh air, and she proved to America that you don't have to be a professionally trained chef to be on national television. Instead, she's a home cook and simply loves to cook dinner for her adorable daughters and husband. If you ask me, she did a phenomenal job on the show and definitely deserved to win.
So far, I've really enjoyed watching her new show, "Ten Dollar Dinners with Melissa d'Arabian." Sure, she seemed a little bit nervous on her very first episode, but who wouldn't?? I watched her cook this recipe for Chicken a l'Orange, and I knew that I wanted to try it as soon as I could.
The ingredients list is very short...only 6 ingredients, including salt & pepper! I whipped this together in a flash, and before I knew it we were digging into one scrumptious meal. The chicken was so incredibly tender and juicy...you could have cut it with a butter knife. The glaze is amazing...the orange and honey are a heavenly combination!
I am certainly adding this one to my chicken recipe arsenal!!!*** 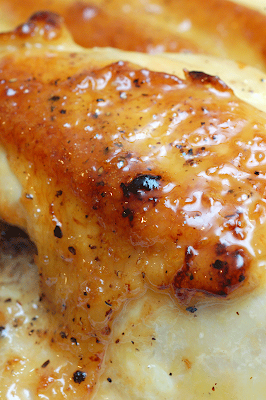 Liberally salt and pepper the chicken breast halves. Heat the oil in a large saute pan over medium-high heat and sear the chicken, skin side only, until brown and beginning to crisp, about 5 minutes.

Meanwhile, make the orange glaze: In a small saucepan, heat the orange juice concentrate, honey, and salt and pepper, to taste, over medium heat, and boil for 3 minutes. Remove from the heat.

Turn the chicken over and brush each piece with the glaze. Turn the chicken skin side up and transfer the pan to the oven. Bake until the internal temperature reaches 160 to 170 degrees F on an instant-read thermometer, brushing on more glaze halfway through, about 15 minutes in total. Let the chicken rest for 10 minutes on a cutting board. Remove the chicken breast from the bone and slice the meat on the bias. Transfer the chicken to a serving platter and serve.
Source: Ten Dollar Dinners with Melissa d'Arabian on The Food Network
Posted by Celeste at Saturday, September 12, 2009

YUM! I love a new idea for chicken and that looks great! I totally starred to try.

My Peace Of Food said...

Wow, this looks mouth-wateringly delicious. And cheap, right? How perfect!

i on the other hand actually made this recipe. since i have never tasted duck l'orange, i cannot attest
to what the chicken is actually supposed to taste like. this recipe tasted like chicken drowning in orange juice. i for one will not make it again. sorry.

Hi Anonymous! I'm sorry that you didn't like the recipe...we found that the chicken had a very subtle orange flavor...not overpowering at all. If you try it again, maybe you could decrease the orange concentrate by half??

what are some good sides for this?

I served the chicken with mashed potatoes and asparagus. The potatoes are great with it because you can drizzle some of the extra sauce from the chicken onto them.

She only has girls - no boys!

Anonymous - Thanks so much for catching that typo!! I meant to say girls...whoops! It's corrected now! :)

yummy! this is an easy one to remember...I can't wait to try it!

i just copied this recipe off your site. i'm also adding you to my favorite blogs!

thanks ,good recipe ur the best

Has anyone tried this recipe using boneless, skinless chicken breasts?

Made this for my boyfriend today and he ate every bit on his plate. That's a good sign! I loved it

I made this tonight and it was delicious!! The skin tasted just like candy, yummy! Very flavorful, easy to make and this will be a staple in my recipe collection! Thank you for the great recipe!!