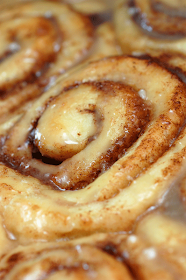 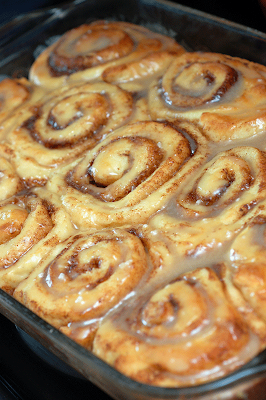 ***Alrighty, here are the cinnamon rolls that I mentioned in my previous post. I put these together on Christmas Eve, and then baked them on Christmas morning. Let me just tell you...there's nothing quite like the smell of yummy cinnamon rolls wafting through the house on Christmas morning...ahhhhh...so wonderful! This is going to be a new tradition for us...fresh, homemade rolls on Christmas. I thought that I might try this recipe, and then maybe try a new one next year...until I found one that I really loved. However, I hit the jackpot on the first try! This is THE recipe that I'll always use.

UPDATE:  Since originally writing this post in 2008, I've  made these cinnamon rolls every year for Christmas!  They are a holiday tradition that my family looks forward to all year!  You can see my other posts here, with lots more photos of these sinful cinnamon rolls:
CHRISTMAS 2009
CHIRSTMAS 2010
CHRISTMAS 2011

I looked and looked online and in my numerous cookbooks for the perfect recipe. I think the thing that got me about this particular recipe was the coffee glaze drizzled over the rolls...omg. You had me at coffee! I didn't look much further after that.

I found this recipe over on Pioneer Woman's blog. She's got a great story that goes along with them, so be sure to check out her post.

I will say that I decreased the ginormous amount of butter that she called for in this recipe. I also halved the recipe to suit my needs. I didn't need 7 pans of rolls...neither do my hips! :) 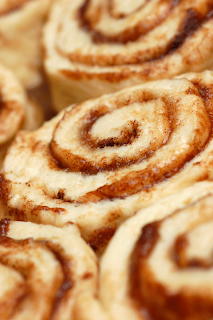 ROLLS:
Adapted from: The Pioneer Woman
Note:   The original recipe makes about seven 8" round aluminum tins of cinnamon rolls.  After cutting the original recipe in half, you'll end up with 3 - 4 tins full of rolls, with 7 - 8 rolls per tin...depending on how large you cut them.

Ingredients: (This is 1/2 the original recipe)

Directions:
Mix milk, vegetable oil, and 1/2 cup of sugar in a pan. Scald the mixture (heat until just before the boiling point.) Remove from heat and let it cool 45 minutes to 1 hour.

When the mixture is lukewarm to warm, but NOT hot, sprinkle in package Active Dry Yeast. Let this sit for a minute and then add 4 cups of flour. Stir mixture together. Cover and let rise for at least an hour.

Next, add 1/2 cup flour, the baking powder, baking soda, and salt. Stir mixture together. From here, you could cover the dough and put it in the fridge until you need it—overnight or even a day or two, if necessary. Just keep your eye on it and if it starts to rise out of the pan, just punch it down. Or, of course, you can just go ahead and make the rolls.

Sprinkle surface generously with flour and roll the dough into a thin rectangular shape, about 1/4" thick. Brush melted butter on top, then sprinkle sugar over the butter, and finish with a generous sprinkling of cinnamon.

Starting with the wide end, roll the dough tightly towards you in a neat line. Next, pinch the seam to the roll to seal it. Spread 1 tbsp of melted butter in each pan/dish. With a sharp knife, begin cutting the dough into 1 inch slices, and laying them in the pans. Let rest for 20-30 minutes. Bake at 375 degrees for 13 - 17 minutes, or until golden.

IF MAKING AHEAD FOR CHRISTMAS MORNING:   Instead of popping them into the oven, just put them straight  into the fridge and let them rise for the 2nd time in the fridge overnight (they'll rise VERY slowly in the fridge). Then, in the morning let them sit at room temperature for about 30 minutes, and then pop them in the oven as directed.

Directions:
Mix together all ingredients, and stir well until smooth. It should be thick but pourable. Taste and adjust as needed. Generously drizzle over the warm rolls. Go crazy and don't skimp on the frosting!
Celeste at Sunday, December 28, 2008
Share