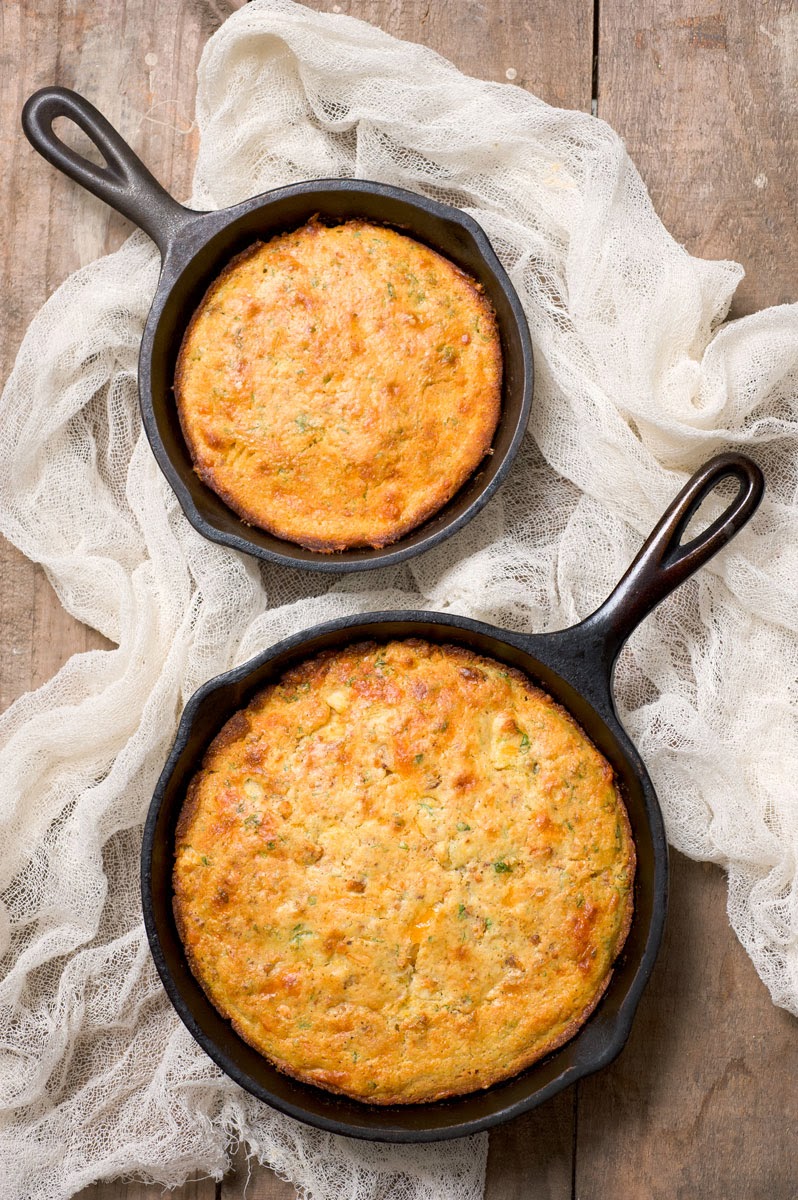 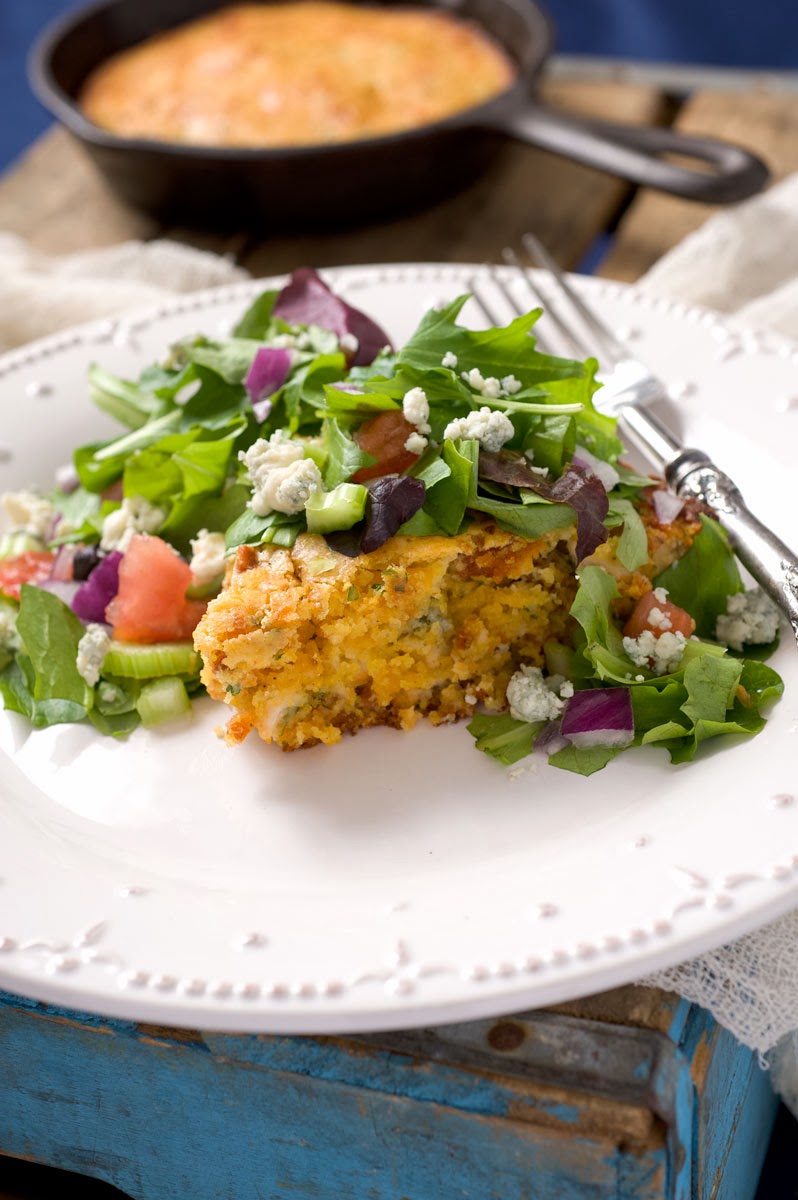 Cornbread is so under-rated, don't you think?  There are so many fun things you can do with it.  For example, this recipe incorporates buffalo chicken, cheddar cheese, blue cheese and freshly chopped cilantro right in the batter.  Um, yum!

And if that deliciousness isn't quite enough for you, a flavorful salad is served right on top of a generous wedge of the cornbread, making this an excellent addition to your weeknight repertoire.  Before eating this, I had never seen a salad served on TOP of cornbread, which I thought was pretty creative and made for a great pairing.

Upon first bite, Brad was hooked.  He loved this cornbread, and I'm usually the only bread fanatic around here.  In fact, this dish is so fantastic, that it actually won first place in the Martha White-Lodge Cast Iron National Cornbread Cook-Off in 2009!  I mean, come on...You can't go wrong here.

I was also hooked the first time I had this dish.  It was at the Martha White/White Lily Southern Baking Retreat last year, which I blogged about HERE.  That was SUCH a fun trip!!  The first day of the retreat, we had the opportunity to sample winning recipes from previous years of the cornbread cook-off.  This particular dish certainly stood out to me, along with several others.  Needless to say, we were all one bite away from total cornbread comas after lunch.  ;)

Speaking of the National Cornbread Cook-Off Recipe Contest, they are currently accepting entries through 2/28.  So, if you've got a cornbread recipe that you're famous all over town for, this is your chance to shine!

To celebrate the cook-off, Martha White is hosting a virtual cornbread potluck, and this dish is what I'm bringing to the "table."  There are 9 other fantastic bloggers participating, so please take a moment to give their blogs some lovin' and check out their cornbread recipes.  This list will surely get your cornbread wheels turning and might even inspire you to enter the contest yourself!  The official contest rules can be found HERE. 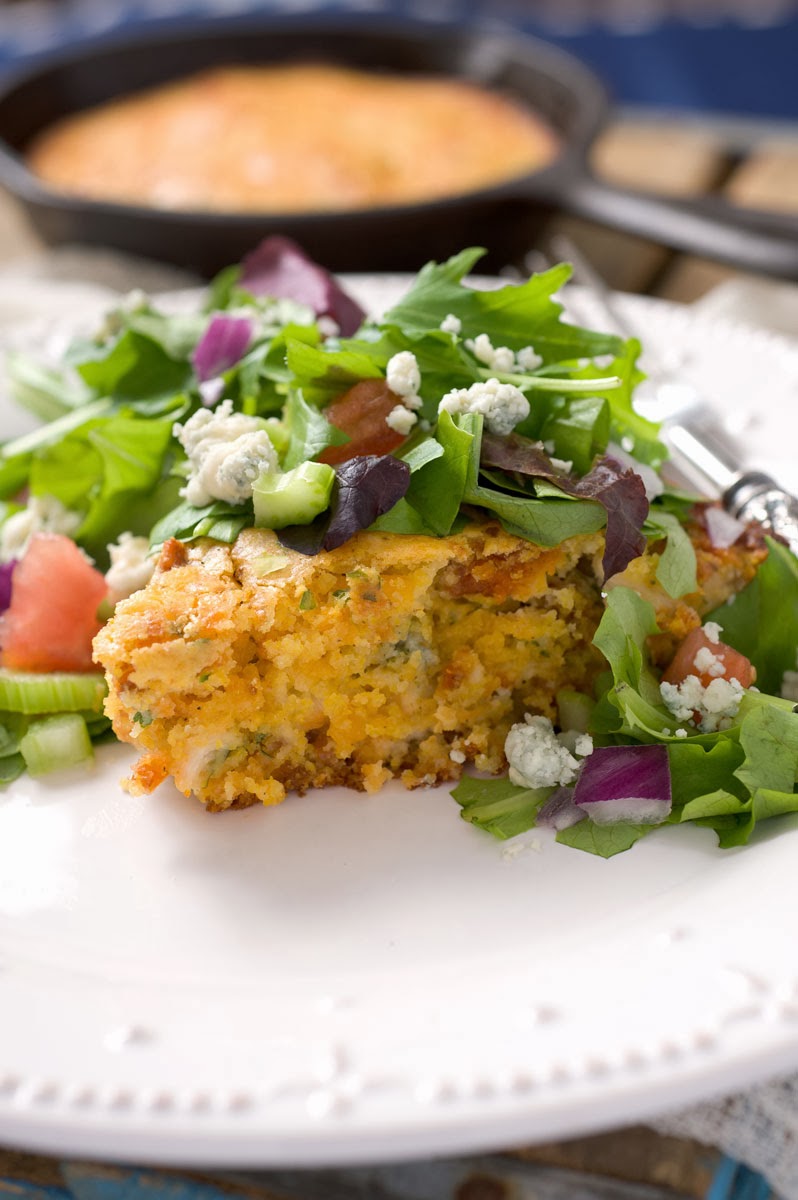 Buffalo Chicken Cornbread & Blue Cheese Salad
Adapted from:  marthawhite.com
Note:  The original recipe called for iceberg lettuce, but I substituted with a spring mix to add a few extra nutrients and pretty color.  I also omitted the red pepper flakes, because I'm a total wuss and can't handle the heat. ;)

Celeste, this looks delicious. My husband isn't a huge cornbread fan, but I'm guessing if I lace it with Buffalo chicken & blue cheese like this, I'll be making it all the time! Thanks for sharing!

This dish truly is a winner! I enjoyed participating in this potluck with you.

How creative, love it! It's on my must-make list, now. Thanks for sharing! ~ Melissa

I love your cast iron skillets. I can't wait to try the Buffalo Chicken Cornbread Skillet. You did a awesome job with the recipe Celeste.

Looks beautiful Celeste! And I happen to know it tastes pretty darn good too! So fun to do this potluck with you!

delicious .. i love this recipe