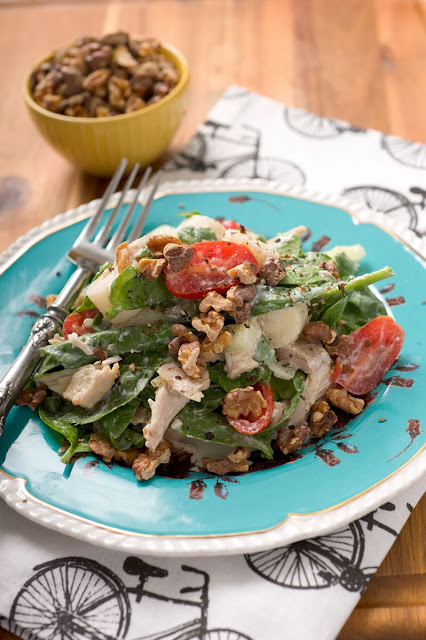 I love a good, tasty salad, and pretty much any salad that incorporates roasted walnuts, pecans or almonds is at the top of my list.   This one caught my eye while scanning the pages of my latest Food Network Magazine.  While glancing at the ingredients list, I noticed something that I had never cooked with before - hearts of palm.  I had heard of this unfamiliar ingredient before but never used it.  I was intrigued, so I dog-eared the page.

Fast forward about a week, and this salad graced our dinner table.  If you're a fan of salad dressings made with greek yogurt, then you'll love this.  It's such a healthy alternative to others.  The blue cheese knocks the dressing down a few notches on the healthy scale, but it adds a great creaminess and flavor to the dressing, which complements the roasted walnuts wonderfully.

To be honest, Brad was not a huge fan of this salad, for two reasons:

#1:  He doesn't really like greek yogurt
#2:  He wasn't crazy about the flavor of the hearts of palm.

On the other hand, I thought this salad was really good.  If you're unsure about the hearts of palm, just leave it out.  In my opinion, it's not really vital.  The original recipe also included beets, which I did leave out. 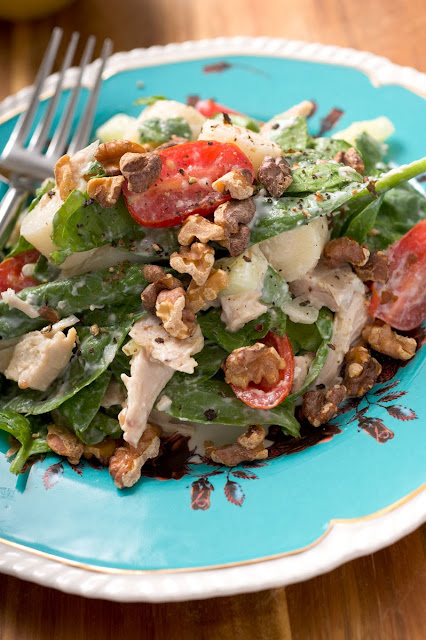 Directions:
Preheat the oven to 350 degrees F. Spread the walnuts on a baking sheet and roast until golden, 10 to 12 minutes; let cool slightly, then chop.

Meanwhile, make the dressing: Whisk the yogurt, blue cheese, shallot and 1 tablespoon water in a large bowl; whisk in another tablespoon of water if the dressing is too thick. Season with salt and pepper.

Add the spinach, tomatoes, hearts of palm, cucumbers and beets to the bowl with the dressing and toss. Add the chicken and toss again. Divide among plates and top with the walnuts. Season with salt and pepper. Serve with the rolls.

I first tried hearts of palm when I studied abroad in Costa Rica and had literally just been harvested which was cool :) They definitely don't taste the same when they've been put in a jar.

With that said, they do have an acquired taste although I like them. I don't think I could eat them every day but they're extremely popular in Latin cooking which I love.

Ooh, I bet it was awesome eating them so soon after being harvested! I liked them, but like you said, it's not something I'd want everyday. :)

Yummy this sounds delicious, love a smoked chicken, thanks for sharing this...