My Interview with John McLemore + A GIVEAWAY 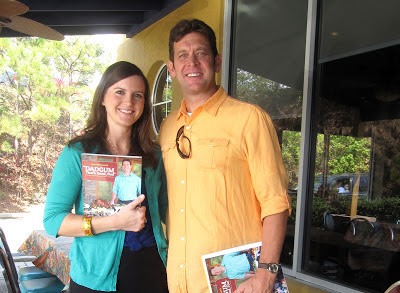 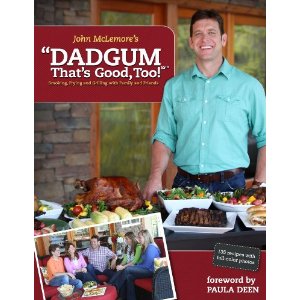 I recently had the chance to sit down with chef, cookbook author and CEO of Masterbuilt, John McLemore, for a delicious lunch here in Birmingham, AL.  John was in town for the day on a media blitz, and I'm so thankful that he took the time to meet with me.  Upon arriving, I was greeted by the entire gang - his wife Tonya, his daughter, his Social Media Specialist and even his pilot!  We had a great time at lunch, and I immediately felt like I had known them for years...What a wonderful group of folks.  We talked about all kinds of fun things - memories of his Memaw's Southern Fried Chicken, the story surrounding his most unforgettable meal, the strangest thing he's ever eaten (it was in China!) and even a visit with Paula Deen, in which she prepared an amazing breakfast spread for John and his family at her home.

I love that John's cookbooks have such a big focus on family.  Flipping through his cookbook is like looking through a family album, filled with wonderful stories, photos and recipes.  Masterbuilt is their family business, and was first started by his father back in 1973.  When he was 19, John and his brother Don became part-owners with their father, and in 1998, John and Don became sole-owners of Masterbuilt.

Read on for more of my interview with John:

1.  Where in the south did you grow up?
I was born in Hawkinsville, GA and moved to Columbus, GA at 6 years old.

2.  Is there a particular family recipe that means the most to you?
MeMaw's Southern Fried Chicken.  We used to fight over the skin!  It's the only recipe that appears in both of my cookbooks.

3.  What's the secret to the perfect southern fried chicken?
Soak the chicken in milk or buttermilk for at least 2 hours before frying.

4.  Tell me about your most unforgettable meal.
It has to be the Steak & Lobster on my first date with my wife, Tonya!  We had been lobstering down in the Florida Keys and had brought back tons of it.  We cooked steak and lobster that night at my house.  Tonya came over - on a blind date, set up by our mothers! - and the rest is history.

5.  What family traditions centered around food do you look forward to most around the holidays?
Deep frying the Thanksgiving turkey.  When I was 18 years old, I decided that I would deep fry the turkey.   The women in the family were worried that it wouldn't turn out right and be ruined, so one family member decided she'd secretly make a roasted "back-up" turkey...just in case.  On Thanksgiving day, my turkey was a major hit.  The only reason that anyone ate the roasted turkey that year was because we ran out of the fried turkey!  We've fried it every year since!

6.  What are your favorite foods from childhood?
Dad's fish and hushpuppies, Catfish Fingers, Cheese Grits, and of course MeMaw's Southern Fried Chicken

8.  Which Masterbuilt product should be at the top of everyone's must-have list?
It's a close race between the electric smoker and turkey fryer.

10.  What would people be surprised to find in your kitchen?
Three different popcorn machines...We are popcorn addicts!


Now, how about that GIVEAWAY?!?
I am so excited to be giving away an AUTOGRAPHED copy of John's latest cookbook, "DADGUM That's Good, Too!"  The book is filled with awesome recipes that are divided into 3 categories - Smoking, Grilling and Frying.

What's your favorite way to prepare the Thanksgiving turkey?

Also, for extra chances to win, simply do the following and leave SEPARATE additional comments letting me know that you did:
The Rules:

Good Luck, and THANKS for reading!  :)

My favorite way to prepare my Thanksgiving turkey is roasting. I brine the turkey overnight with herbs and buttermilk. Then Thanksgiving morning, I prepare a herb butter rub and brush all over the turkey. Then place in the roaster. I would love to try a smoke turkey, but don't have a smoker or a deep fryer to try a fried turkey. I love your blog and would like to have a chance to win this cookbook. I've got to try his MeMaw's Southern Fried Chicken. My weakness. Thank's for the contest.

My favorite way to cook a turkey is to cook it in the roaster. It always turns out moist, and then I have plenty of oven room in the over for other dishes.

Make it my mother-in-law did....make reservations! LOL Especially if we are lucky enough to run away to the beach.

Our favorite way to make Thanksgiving turkey is smoking it over hickory. We brine the birds and then smoke them on a Green Egg. My grandchildren refuse to eat it any other way. The taste is even better than the smoked turkeys from Bates in Greenville, AL.

if you are in Hawaii, find a school doing a kalua turkey fundraiser
gkuroda(at)gmail(d0t)com

liked you on fb
gkuroda(at)gmail(d0t)com

I roast my turkey with lots of butter and homemade chicken broth in the bottom of the roasting pan--also lots of thyme, and other spices.

My husband "fries" our turkey in his oiless, infrared cooker. It's delicious!!!

My favorite way to prepare a turkey is to let dad do it! Haha :)
Suzanne
SuzieQ4855@aol.com

Name = Greg. My favorite way to prepare a turkey is to rub it down with butter and oil, salt and pepper, and then put onion, lemons, and rosemary in the cavity. (And don't forget to take the neck out like I did my first time!) lol

I like to brine my turkey in a large ice chest with brining mix I bought at a kitchen store. Then I roast it in a roasting pan

I am honestly not a big fan of turkey but I'll have a piece following my wife's roasting in our oven. Watch out sides though, let me get a little of everything-stuffing, mashed, sprouts, etc. etc. etc

I always roast our Thanksgiving turkey.

My favorite is baking the turkey!

When I was a kid my uncle made a Creole-stuffed turkey and it was so amazingly good! It was so different from anything I'd ever had and I love him for trying to get our family to try different cuisines. :)

Why, fried, of course! I have 3 brothers and one of them is always frying for Christmas and Thanksgiving. I get to take advantage of all that oil! LOL! Mmmm....nothing better!

I Followed the Sugar & Spice by Celeste board on Pinterest

My favorite way to prepare a turkey is actually done by my husband. He uses creole seasoning and fries it! It is so yummy!!

I use an over 60 year of electric roaster. I am nervous every year until the old thing gets up to temperature. I was my grandmothers. I brine it over-night. It is juicy and delicious every time.
steelers@mchsi.com